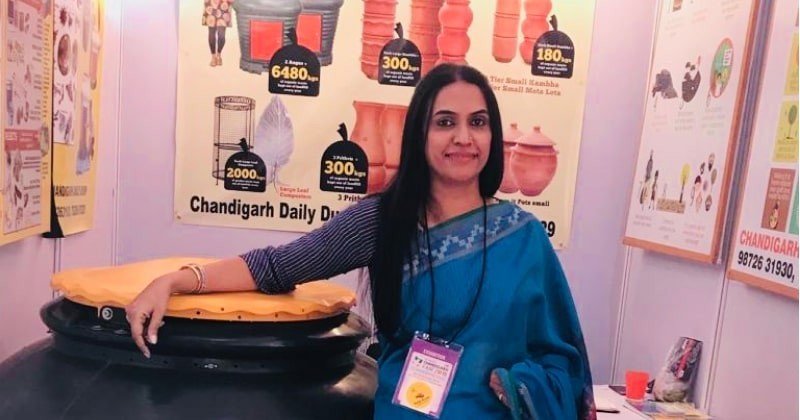 My success story is essentially a work in progress. But let me tell you how the journey began. If there is a story, there is a protagonist, a hero. My hero is the humble garbage collector. He rings the bell to collect the garbage of the day. He has a big cart with large sacks hanging around them. So, that particular week, my staff was off and the onus of packing and throwing the bags fell on me.

While handing over the bags, over a few pleasantries, I noticed that he had a big gash on his hand which was bleeding. To my horror, he ripped open my bag and with his injured hand, he started sifting through the waste, putting sanitary pads into one sack, plastic and cardboard in another and kitchen waste into yet another. I cringed in disgusted as I saw him doing this as a matter of routine. I offered him first aid but he casually brushed it aside, saying, the cuts were routine. Some neighbor had thrown a bulb. That was my first trigger.

The image stayed in my head and the action played in my mind through the day. The whole process was so inhuman, the stench from his cart was nauseating and he did not even have the basic protective gear. I had heard of terms like segregation, recycling, composting of waste but I did not know much about them. I researched. The deeper I went, the more I was appalled to know that the way we throw our waste is not only hazardous to the waste collector but also a disservice to the Earth we live on, the air we breathe and the water we drink and the food we eat. That garbage bag was poison that I was packing and throwing out of my house, daily. That was my trigger number two.

The alarm bells were ringing in my mind. My research pointed out that in the long term once the cycle of waste disposal is complete; the most affected and are the children, with their weaker immunities and vulnerability to diseases like asthma, allergies and also cancer. I had to do something for my son who was then 8.

In the garbage bag, 60-70% is kitchen waste that can be composted at home. About 20% is recyclable waste and 10% is toxic waste, which has to be given to the garbage collector. I decided to target the 60-70% of which could be composted. I was a part of the organic market in Chandigarh and had attended workshops on pit composting. I made a composting pit in my house but soon realized that it wasn’t a solution for me.

I had rodents in my garden and backyard. That pushed me to look for other options. There had to be something more practical and effective which could be done at household level. Then I discovered Daily Dump. A Bangalore based firm started by this amazing woman Poonam Kasturi. They made composters for homes and communities to convert all the organic waste into compost in a hassle free way. There products were functional, beautiful and effective. Moreover, this was a woman entrepreneur, and since we women are most informed about our household waste, I was reassured; she knew what she was doing.

I boarded a flight to Bangalore to get myself trained in using these composters. Then back home, I experimented with these products for almost a year and finally when I was confident that I could handle every question and address every myth around composting, I signed up as Daily Dump’s Partner for North India. In December 2016, I got my first truckload of composters. I was so scared, a new venture and that too about a most taboo subject, waste. But here the pillar of my strength was my husband, who understood my trepidation and helped me to ease them out. His one dialog always resonates with me. When you’re following your heart, don’t think of economics, do it as a service. The scale of the economy will balance it. It was a slow and steady journey, with our shares of ups and downs.

We started from Chandigarh and now we cater to Punjab, Haryana, Himachal Pradesh, NCR, and Uttarakhand and last week we sent community composters to Agra. My firm has been an all women firm, and very reluctantly last year, I hired a male delivery person. I guess when you follow your heart with integrity; the cosmos conspires to make things happen for you. I am happy and very proud to share that we have helped 967 households to start composting at home and installed 447 community composters, called Aagas, at various apartment complexes/hotels/office kitchens.

My work is a passion driven social mission and enterprise and it is gratifying, engaging and gives me a strong sense of purpose.

I would like to tell you we, Vatama Solutions, are saving 6500 kgs of waste from going into landfills everyday, which is nearly 2 lac kgs per month. In the mammoth mountains of waste dumped in landfills, these numbers are just a drop in the ocean, but it is a substantial drop. I wish we all get together and make this drop a deluge.